If you’re looking for an upbeat high abound with social energy and motivation, look no further than the beloved White Widow strain. This strain is an all-time fan favorite and has really gained a worldwide fan base. It has an interesting flavor with notes of peach, skunk, fruit and spice and will really relax you without causing sedation. It’s a great one for morning use. 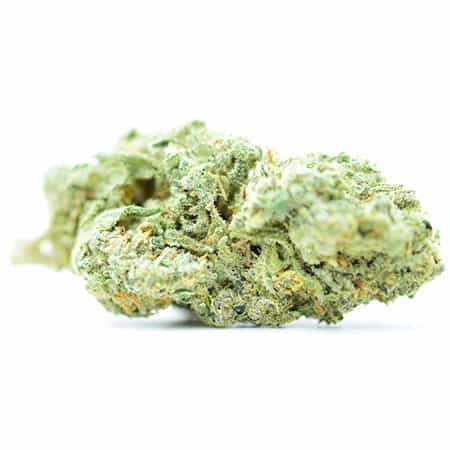 If there is any one marijuana strain whose name has been thrown around for two decades all over the world, and people still aren’t tired of hearing about it, that would be White Widow.

In fact, it’s pretty obvious why the White Widow strain is the one that ‘connoisseurs,’ beginning cannabis enthusiasts, MMJ patients, and stoners just can’t stop buzzing about. Really, if it wasn’t for our worthy and trusted White Widow, other out-of-this-world flowers such as White Russian, Blue Widow, and Black Widow would not even exist.

White Widow is a euphoric, downright stimulating strain, making any reality you might be living in totally and completely enhanced — in a positive way.

In our humble opinion, the trichome-laden White Widow cannabis strain is one we should all be thanking for making the pot-smoking world a better place – a place filled with good vibes, good times, and potent medicinal highs.

Winning the High Times Cup in 1995 when it was first released, as well as being generally recognized as one of the most popular marijuana strains in the world, White Widow cannabis is classified genetically as a hybrid with a slight indica dominance. Realistically, the strain mostly it emits a fine balance between sativa and indica, with a roughly 60% indica and 40% sativa profile.

Even if indica genetics might technically dominate White Widow’s makeup, however, its effects surely don’t represent your typical indica characteristics, with a high that does anything but make you tired, couch-locked, or lethargic.

The unique high from White Widow is typically upbeat and mesmerizing, and will relax your body without causing your mind to want to fall asleep.

This beautiful girl was originally bred by Green House Seeds in the Netherlands during the 1990s, and soon after developed into a European favorite – highlighting almost every menu across the countless number of Amsterdam coffeeshops.

White Widow’s parent plants give a clear explanation of why this strain has such a balanced energy, originally descending from heirloom breeds of South American (sativa) and South Indian (indica) heritage.

With both parents being categorized as landrace strains, it’s probably pretty obvious that White Widow turned out to become a highly potent and genetically-desirable strain, with understandably hard-hitting effects in terms of strength and therapeutic effectiveness.

And of course, the White Widow cannabis strain has become legendary for its immense resin production, as it routinely clocks in with THC levels in the 20-25% range — all adding up to produce a vibrant flower that offers a host of legitimate medicinal benefits.

In every sense of the word, White Widow weed might just be qualified to assume the status of a “perfect” marijuana strain — or at least as close to perfect as earthly possible. In the pothead’s eyes, it doesn’t really get much better than WW.

Those who regularly consume White Widow marijuana have described its aroma as ‘skunkily pungent,’ with a sophisticated hint of hempy spice and exotic equatorial berry. In fact, the aroma of White Widow marijuana is so dynamic that most any stoner could probably sense its presence within a range of about 300 square yards. And rumor has it that Michael Phelps can even smell it underwater if someone cracks open a jar within about 200 ft of him.

With this in mind, if you are planning on consuming White Widow with discretion, this is probably not the strain to experiment with – unless you take extra preventative measures to keep the stinky scent under wraps (smoke outside, eat an edible, use air filters, or spritz a scented air spray to help kill the smell).

White Widow’s skunky bouquet of odor is so vigorous, we wouldn’t be surprised if Michael Phelps could detect its presence while underwater.

Sometimes, certain batches of White Widow express a particularly fruity or spicy taste, feeling as if you have just bitten into a ripe peach or juicy apple, mixed in with spice like nutmeg or cinnamon.

Appearance-wise, White Widow weed is laden with frosty, bright crystals that glisten and gleam the minute any source of light hits the nuggets. Underneath that snow-covered first blanketed layer, however, glimpses can be seen of fat sage-green buds stacked up together in tall colas, ready to be cut apart and trimmed down for the world’s best smoke.

Additionally, the presence of the long bright orange pistil hairs reaches straight up to the heavens, curling on the way and joining the lengthy dark green water leaves that express an ombre-like color gradient in appearance, making this scene rather delightful aesthetically. In our opinion, there really is not a more attractive or visually appealing marijuana strain than White Widow.

White Widow is a hearty ‘survivor strain,’ which makes it a suitable option for any individual who has at least some experience with growing cannabis — even if this experience is sparse.

White Widow weed is fairly resistant to molds, bugs, and even colder climates, which is why – when cultivated properly – it can grow successfully without too much fuss (as long as the basic conditions and needs of the strain are being met).

White Widow was originally bred to be grown indoors, but those who are blessed with sunny climates may successfully cultivate the frosty strain outdoors.

White Widow’s flowering period is around 8 weeks, but it can usually be grown for two more weeks in order to obtain the snow-capped frosty look that is so often attached to this strain.

If you are choosing to extend the flowering process to 10 weeks instead of 8, however, it is vital to induce a bit of stress into your girls by shortening your light cycle from 12 hours daily down to 8 hours. This will keep anything drastic from happening to your plants during the two extra weeks and will generate plenty of accumulated frost so you can get the appearance you desire from your crops.

You can look forward to your White Widow growing to about two feet tall indoors, with much greater (yet varying) heights for outside production.

Also, it’s worth pointing out that when grown indoors, it is possible to successfully use the Sea of Green method alongside your usual cultivation process. And be advised that White Widow typically flourishes in a hydroponics system, soil growth, or any other indoor technique.

A typical indoor yield is around 20-24 ounces per meter squared, which is pretty average in relation to other marijuana strains. If you are brave enough to take on the challenge of cultivating your White Widow outdoors, make sure to attempt to provide your strain with as warm of weather as possible, typically in the 65-80 degree Fahrenheit range, with more than enough direct sunlight.

Although White Widow weed is known for being somewhat resistant to colder climates, you don’t want to keep the plants in the cold too long, as you may risk your hard work going to waste. An outdoor-grown White Widow weed plant typically yields around 21-25 ounces of flower per plant, with the crop itself growing up to 6 feet in height – occasionally even taller. Harvest is usually in the end of October for White Widow, unless you are choosing the extended method of flowering.

Overall, growing White Widow marijuana is fairly easy, and even suitable for complete beginners if they are experimenting with the cultivation of just one plant in a closet or backyard. As long as you treat your White Widow well and give it the proper care, you should have some decent-tasting cannabis in the end.

THC percentage-wise, White Widow tops out at a stunning 20-25% level, making it one of the strongest and most potent cannabis strains in the world alongside heavy hitters like Afghan Kush and AK-47.

The White Widow strain leaves you feeling energized yet relaxed, in a state of complete euphoria that will allow you to function regularly – just with a slightly more positive overall energy.

Due to high levels of resin and trichome production (and therefore THC), the effects of White Widow are just as stunning as the cannabinoid profile suggests.

Expect your mind to become stimulated by these refreshing and invigorating buds, which often enhance creative energy and cause conversation and communication to flow naturally and with a simplicity that you may not experience in your normal day-to-day life.

White Widow weed is an ideal choice for those seeking pot that will not cause them tiredness, lethargy, or lack of energy (like indicas so often can), but rather a quintessentially happy, balanced medium that exists somewhere between relaxed and hyper-aware.

Although White Widow marijuana has been explored for use with numerous medicinal conditions in the past, the most notorious relief this healing strain seems to provide is for individuals that suffer from:

For those handling psychological conditions (depression, anxiety, stress, PTSD), a small to average-sized dose of this cannabis strain is probably best, as over-consuming marijuana when dealing with a mental condition can sometimes lead to greater paranoia and anxiety.

It’s vital in this circumstance to understand and know your limits well with cannabis, and stick by those levels so you don’t end up in a worse position. For those dealing with the menaces of chronic pain, a larger, more potent dose is usually in order. This is why consuming edibles, concentrates, live resin, candies, or fatter-than-usual bowls are the go-to methods for people who use WW as a daily medicine.

The most frequently-documented side effects by those who consume White Widow weed is – surprise, surprise – dry mouth. Of course, this can be resolved by drinking plenty of hydrating fluids, and always having an extra supply nearby you before, during, and after your high.

Occasionally WW users will report dry eyes as well, but this is less regular than dry mouth. For dry eyes, affordably-priced moisturizing eye drops can be purchased beforehand from any local drugstore and applied whenever you feel they are necessary (or when somebody says you look like you got shot in the face with an entire bottle of bear spray.

Be the first to review “White Widow” Cancel reply